Join our speakers and USJETAA for a discussion on how you can be proactive after JET in finding your next big opportunity. Our speaker will share their own journeys after JET and how they have utilize the JET alumni community to kickstart their careers. This webinar will equip everyone with the ways to start connecting and getting involved in the JET alumni community.

Please register in advance for this meeting: 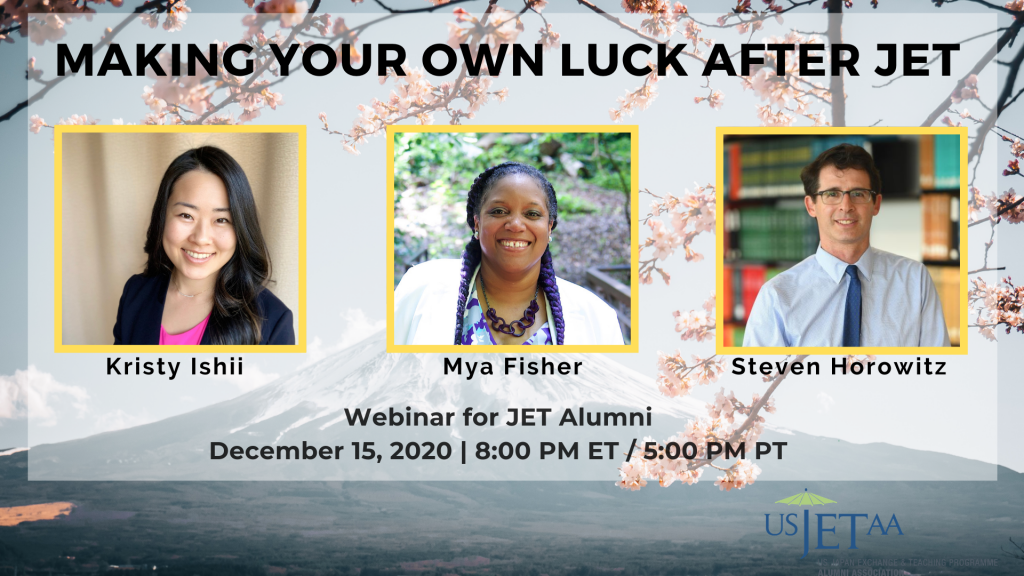 Steven Horowitz (Aichi-ken, Kariya-shi, 1992-94), also known as the JETwit guy, is the Director of Online Legal English Programs at Georgetown Law School. He is also the founder of the JETwit.com media empire, serves on the JETAA USA Board of Advisors, and has previously served on the Board of JETAANY as well as served as the JETAANY Newsletter Editor. He became a JET because he didn't know what he wanted to do after college and despite knowing nothing about Japan other than what he had read in the book You Gotta Have Wa by Robert Whiting about Japanese baseball. After JET he went to law school at Duke because he got in and didn't know what else to do after JET. During law school he escaped back to Japan twice, once taking off a whole year from law school to work in a Japanese lawyer's office, and again for a semester to engage in "independent study" at Waseda University. He managed to get a job at a big NY law firm and lasted nearly a year and a half in corporate bankruptcy law practice before deciding to stop working there. He next spent a year not knowing what to do before finally taking a temp job to pay the bills with a small company that happened to work with big law firms on corporate bankruptcy cases. After 6 years of that, he involuntarily tried out freelancing and then grant-writing. At that point he had a revelation that he should go back to teaching ESL, which he did, eventually getting a masters degree in TESOL from CUNY-Hunter College, teaching ESL, legal English and adult basic education writing in various contexts before landing a job with St. John's Law School. Steven then helped St. John's Law build up its legal English program for the next 5 years before starting a new job this past January 2020 as Director of Online Legal English Programs at Georgetown Law School. Steven now lives in Silver Spring, MD (after spending the previous 20 years in Brooklyn) with his wife and three children. He has tried and failed at numerous jobs, and succeeded at a couple. And he has JET to thank for all of it. Why and how? Join the upcoming webinar to find out! (Side note: His life goal is to connect with as many JETs and JET alumni as possible on LinkedIn.)

Mya is the Chief Executive and Transformation Officer for Global Equity Forward, an international strategic consulting and advisory practice focusing on equity and inclusion. As a woman of color who has greatly benefited from international opportunities, equipped with a myriad of complex skills through education and experience, and a long-involved professional in the U.S.-Japan community, Mya has always approached her work through the lenses of equity in opportunity, accepting diversity, and fostering inclusion. The two years she spent as an ALT in Kawasaki City inspired and energized her 20-year career in international exchange and cross-cultural training. Japan has been a consistent part of her life since she first spent the summer as a high school student in Yokohama. After JET, she returned to the DC area and while exploring various ways to remain connected to Japan and cultural exchange as a volunteer, she discovered the field of International Education as a career pathway. This led to many years of graduate study - International Education, Sociology - all the while, continuing to do Japan related consulting work on the side. She even spent seven years working at the U.S.-Japan Council, growing the extent and impact of their TOMODACHI Initiative as well as designing and launching the multi-million dollar Watanabe Study Abroad Scholarship. The events of 2020 - coronavirus pandemic, it's disparate impacts on communities of color, and increased calls for racial justice in the U.S. around the world - inspired her to use her voice by starting a blog - Global Education Diversity Dialogues. It is a platform for engaging on topics related to international education, diversity, and race. She began writing a series on Racial Justice in the U.S.-Japan relationship and returned to teaching, offering a virtual, primer version of her sociology course - How Race and Ethnicity Shape American Life. However, it didn't feel like it was enough. Mya wanted to do more and felt 2020 was the time to do it, so she decided to start her own strategic advisory and consulting company Global Equity Forward. While her heart is strongly tied to the U.S.-Japan community, she believes issues of equity and inclusion need to be addressed in many places around the globe. Today, we have the opportunity and time to reshape our communities as we want them to be! Mya lives in Northern Virginia with her fur babies, guinea pigs Ralphie and Magik. In her limited free time (even during covid), she enjoys outdoor walks, watching movies and tv shows on all the streaming platforms, and talking with friends on the phone (yep, old school).

Kristy Ishii (Gunma-ken, Tatebayashi-shi, 2016-18) is a UCLA Alumna, 4.5 generation Nikkei American. An ex-JET from Gunma and ex-recruiter in Tokyo, at the age of 26, Kristy started a coaching company that focuses on guiding bi-lingual professionals through life transitions and career changes. Her signature program will launch in 2021 for bilingual, internationally minded young professionals aiming to start a new career in Japan. She has 10 years of experience working with nonprofits, designing events, panels and workshops in both the US and Japan, and is a known super connecter in the Japanese American community.She is president of the Japan Chapter of the Japanese American Citizens League (JACL), an Asian American NPO, that supports a community of over 600 people. JACL Japan events focus on community and identity, and spark conversations surrounding the experiences of Third Culture Kids (TCK), Returnees, Nikkei Diaspora, Japanese American History, and inclusive definitions of Japaneseness. With a deep understanding of countryside and urban Japan, and the diasporas of Nikkei around the globe, Kristy aims to empower those who want to bridge the gap between North America and Japan. Kristy works from both California and Japan, as a digital nomad, and enjoys playing beach volleyball, eating Chipotle, and watching sunsets