On January 21, 2020, USJETAA and the Sasakawa Peace Foundation USA again partnered to a U.S.-Japan Town Hall at Florida International University (FIU) in DC. This was the second year that USJETAA and SPFUSA jointly hosted a hybrid U.S.-Japan Town Hall. There were 35 people at the event in person and 26 joined online – with one attending from as far away as Japan.

Mr. Francis explained that the goal of the “Thank You, Japan!” Initiative is to create bonds between the athletes and the host country they will be traveling to. They want to contribute to the positive legacy, say thank you to Japan for hosting the world, and contribute to the global community by sharing Olympic and Paralympic values such as respect and inclusiveness. This is done through a nine-month campaign of activities between the athletes and the people of Japan. Activities include an accessibility tour of Setagaya City and sports clinic with students. Olympic athletes usually don not have any chance to engage with the host culture during the Olympics, so this gives them an opportunity interact with the community. In relation to the Paralympics and accessibility in Tokyo, Dr. Fisher pointed out that just 4 years ago Japan passed their anti-discrimination laws. Mr. Francis, “Japan is more accessible in 2020 than it has ever been in the past.” The games are bringing accessibility to the table.

Other programs and collaborative efforts are made possible by the upcoming games. The TOMODACHI Initiative in collaboration program with the U.S. Embassy new program called the TOMDACHI-U.S. Embassy Go for Gold Sports Leadership Program, which is an extension of the U.S. Embassy Go for Gold Program. The program engages the next generation of leaders. Sports can do this without needing language. The program brings Japanese college students studying sports to the United States to extend the goodwill of the Go for Gold Program.

There is a structural legacy to the games with new stadiums, housing, and other physical resources. It is not always clear what will happen to those structures after. In the two-week program, students go LA and NYC. The program looked to the LA 1994 Olympics and their planning and brings the Japanese students to LA to think about how these venues were used there. They also consider the on-going preparation for the 2028 Olympics. In NYC they study the broader sports business and the diverse areas of the industry, from accounting to mental health. The goal of the new program is that the participants will have an opportunity in a forum to share what they have learned and propose new ideas in Japan.

Ms. Joe spoke on how the Japan-U.S. Friendship Commission (JUSFC) tweaked their Creative Artists program for this year to incorporate art and the Olympics in partnership with the National Endowment for the Arts. JUSFC is a federal agency focused on people-to-people exchange and mutual understanding between the countries. Ms. Joe described U.S.-Japan relations as “turning the Titanic” because you do not see results immediately. The Creative Artists program is 42 year old, but this year they are paying homage to the modern Olympics, which used to include arts as part of the Olympics. The Creative Artist program already existed and sends five U.S. artists a year to live in Japan and pursue their art. This new iteration of the program in honor of the Olympics supports artists in the U.S. and Japan collaborating as pairs to produce art to show during the Olympics. This is new way to engage in people-to-people exchange.

Dr. Fisher asked the panelists about some of the new partnerships that have come out of these campaigns or programs. Ms. Joe sees new partnerships an an opportunity to get new people interested in Japan. In the case of JUSFC and the NEA collaboration the NEA contacts have been involved in a different way than in the past. The current program is an opportunity for JUSFC staff, with a long history of working with Japan to see Japan through the fresh eyes of the NEA representatives. For the USOPC, Mr. Francis explain that it has been an opportunity for them to work with the U.S.- Embassy in Tokyo. The people-to-people exchanges that occur as part of the Thank You, Japan” program create new partnerships between the individuals who have the change to meet each other, especially in the case of efforts in areas that experienced natural disasters in Japan.

In the long-term changes these program will make changes in furthering the U.S.-Japan relationship. With the Olympics and Paralympics, Japan will have the whole world on their doorsteps and it will be a chance for Japan to connect with and engage with people different from them. Millions of people will be in Japan and it’s an opportunity for individuals to learn and develop bonds.

It provides awareness and buoyancy to the work of U.S.-Japan relations because there is an access point to connect Japan into the conversation. Interest in the Olympics becomes interest in Japan. It has also given JUSFC an opportunity to inject freshness into their existing program. With the artists working together across countries, these collaborations may in lasting relationships between the artists that would not have happened otherwise.

People often ask about the importance of focusing on U.S. Japan relations. Dr. Fisher asked the panelists what they would tell them about why this is important.

Mr. Francis explained that the term “Olympism” encompasses togetherness, respect, and inclusiveness. For those traveling to Japan for the games, the Olympic spirit will be around them and everyone feels the same positive spirit.

Ms. Joe shared her story of how she studied Japan since she was 17 and after school worked in U.S.-Japan relations. After that, she worked with impoverished children in literacy and nutrition. When she went back to work in U.S.-Japan relations and she questioned why she was doing the work. Around this time, an intern said to her, “you have to remember you’re preventing a war in the future” and this stuck with her. Because you do not see results every day it can be easy to second guess the work, but it does make a different. She explained that as a person of color who knows Japan intimately and advocates for U.S.-Japan relations she sees that things are happening. As a lifelong student of Japan and she want to bring others along. It does not matter what gets them into it, if it’s manga and not Basho, any access point is good.

Following the moderated discussion was a lively Q&A session that included questions from within the room and from those attending virtually (this begins at 51.05 in the video). 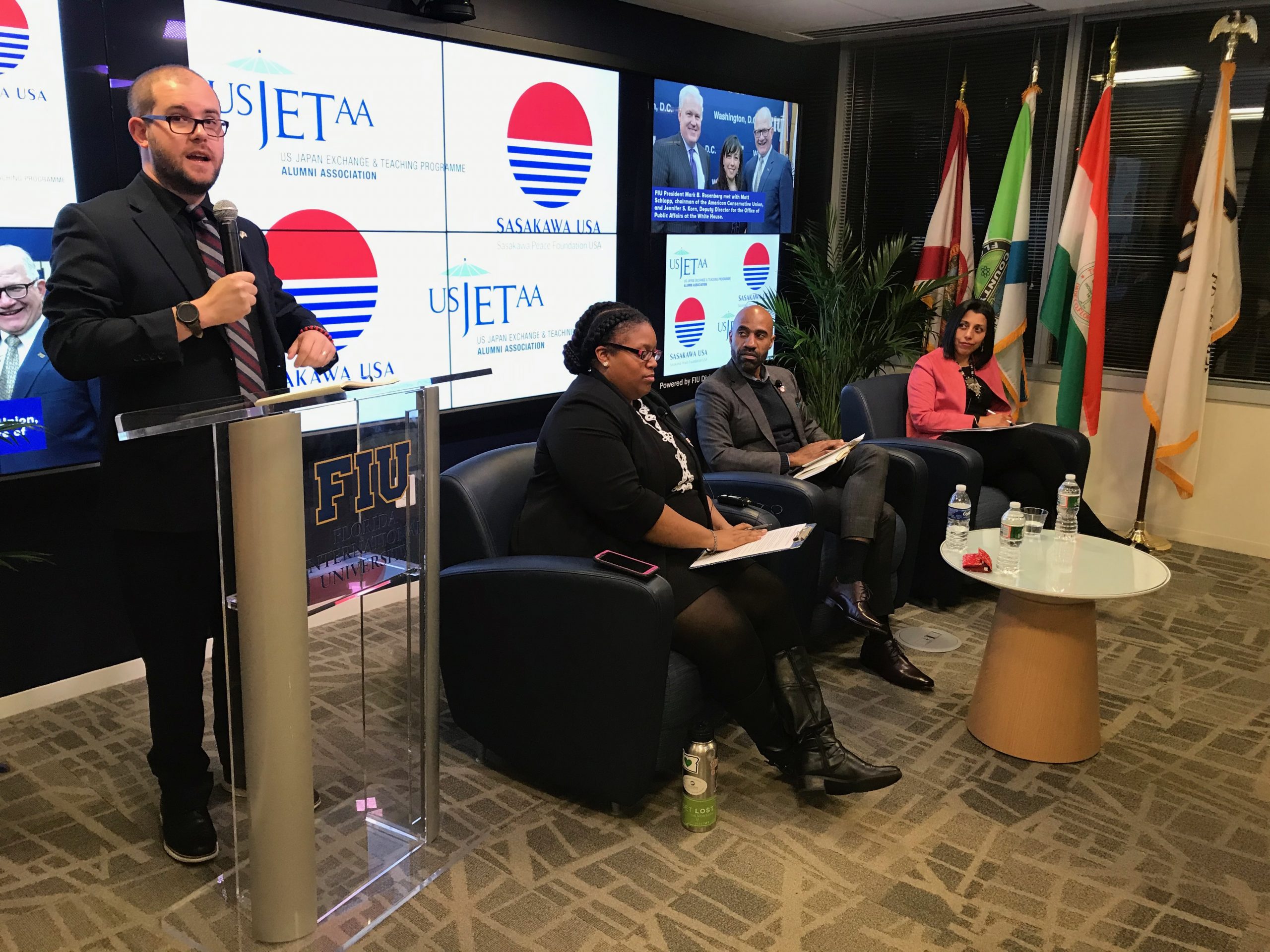