On February 10th 2019, the New England JET Alumni Association (NEJETAA) and the Japan Society of Boston (JSB) co-hosted and event “From Kyoto to Boston: Exploring the History and Cultural Significance of Japanese Kimono.” The event educated attendees on the cultural significance of Japanese kimono and history of cross-cultural exchange in arts and fashion related to strengthening U.S.-Japan community ties. Initially, the event was capped at 30 participants, but due to the overwhelming interested they opened up 10 additional slots for the event. In total, there were 51 participants in the event with the following breakdown: 16 JET alumni, 10 JSB members, 13-non-JSB members, 12 volunteers and organizers. 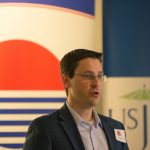 Matt Krebs, Executive Director of JSB, gave the general welcoming remarks. Next, Consul General of Japan in New England, Rokuichiro Michii gave a short introduction of Japan and the Boston-Kyoto sister city relationship.  Then, USJETAA Executive Director, Bahia Simons-Lane, and Program Officer of Sasakawa USA, Joy Champaloux, introduced their respective organizations and the purpose of the chapter grant program. Finally, Josephine Chong, President of NEJETAA, gave a brief description of NEJETAA’s mission and our hopes to build stronger relationships with our local communities.  This was a great opportunity for each organization to promote and educate the audience members on the goal of group, and more importantly, on the common goal of strengthening relationships between Japan and our local communities. 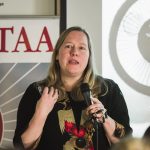 The first speaker was Dr. Sarah Frederick. Dr. Frederick is an Associate Professor of Japanese and Comparative Literature at Boston University, and has received a BFRI (Bunka Fashion Research Institute) and MEXT Collaborative Fellowship for research on representations of kimono in literary modernism and the modernist and cosmopolitan aspects of kimono wearing and representation. Prof. Frederick’s talk focused on the History and Influence of Kimono on Western Culture and Art, and the subsequent cross-cultural exchange between Japanese and Western Cultures. Prof. Frederick’s lecture prompted a thoughtful and wide ranging discussion with audience members on the state of the kimono industry, to the differences between cultural appropriation and cross-cultural exchange. When planning the event, NEJETAA was careful to avoid activities which could be interpreted as cultural appropriation, especially considering the context of the ill-fated Kimono Wednesdays event at the Boston Museum of Fine Arts. The organizers focused on education, and how education and appreciation of kimonos can help enhance cultural exchange and strengthen relationships. Each guest speaker was carefully chosen based on their expertise and provided a different educational aspect relating to kimonos.

Following Prof. Frederick’s lecture, there was a short 15-minute break for refreshments where participants were given an opportunity to network and mingle. The refreshments included traditional Japanese snacks popular in Kyoto such as senbei, manju, and mochi. Several types of tea including green tea, jasmine tea and oolong tea complimented the sweet and savory traditional Japanese snacks. In order to promote membership for NEJETAA, participants were gifted colorful Japanese textile samples used in yukatas packaged with NEJETAA magnets listing the chapter website and Facebook page. Participants were free to choose from over 30 designs, and were very enthusiastic about receiving a memento of this event.

After the break, Chong introduced the second guest speaker, Ara Mahar. Mahar is a JET Alumini (Kumamoto, 2016-2018). She spoke about her personal journey of becoming a kimono dresser, and how the JET Program gave her an opportunity to pursue her passion in Japan. The audience reciprocated Mahar’s passion for kimonos, which led to an enthusiastic discussion on kimonos and her personal experience in Japan, including her thoughts on cultural appropriation and experiences as a foreigner who is passionate about a Japanese art form. 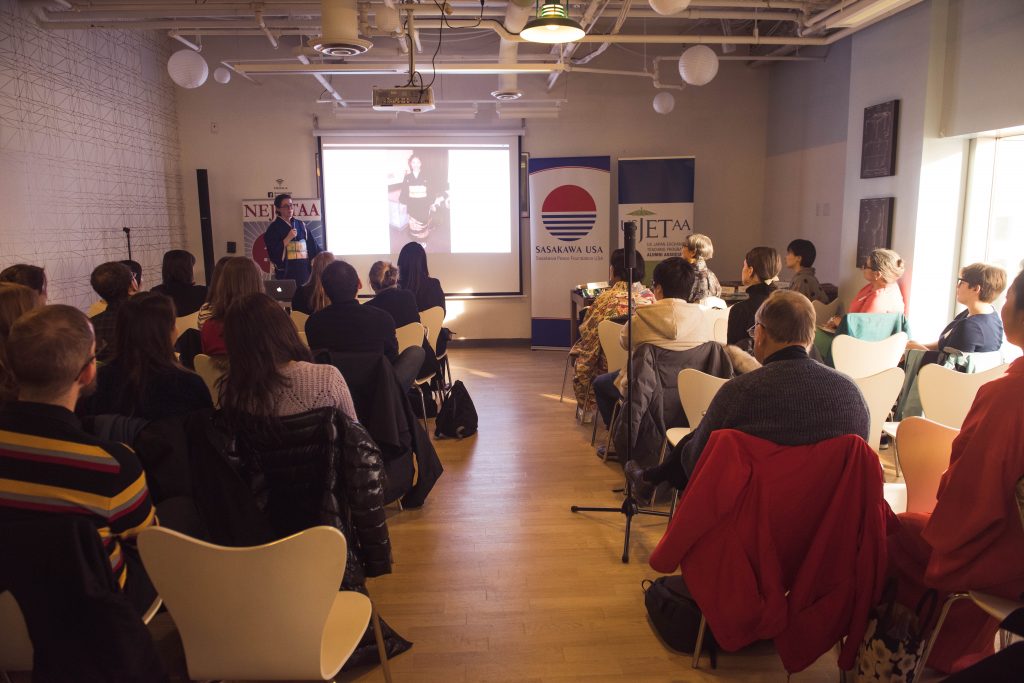 Finally, Chong introduced the last guest speaker, Izumi Noguchi, a Kimono Independent Scholar and Lecturer at Harvard University.  Noguchi explained the different types of kimono, and their current uses in modern day Japan. There was a display of different kimono fabrics, and participants were given an opportunity to touch and interact with the kimono samples on display. After a short Q&A period with Noguchi, Matt Krebs of JSB gave the closing remarks for the event. 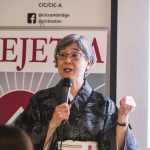 After the closing remarks, participants had another opportunity to network and mingle. They could also try on yukata which had been gifted to JSB from the annual Kyoto Gion Matsuri祇園祭(festival). The Kyoto Gion Matsuri festival is the most famous festival in Japan, and takes place over the entire month of July. As Boston and Kyoto were celebrating 60 years of a sister city relationship these yukata connected to that celebration.  Ms. Noguchi and her assistant stayed to educate audience members on how to wear a yukata and participants had a chance to have their pictures taken wearing the yukata.

Participants were very enthusiastic about the event, and several audience members showed up wearing a kimono. Many participants also took the opportunity to network with other members of the local community and learn about Japanese culture. 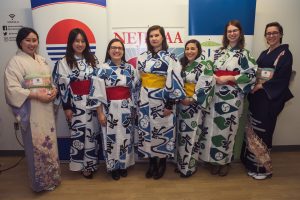 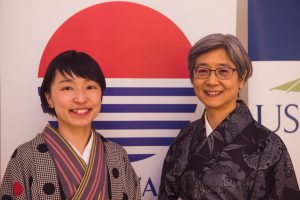 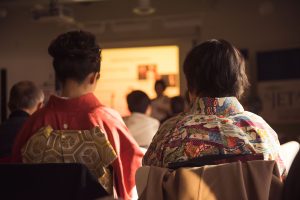 This event was part of USJETAA’s Chapter Grant Program funded by the Sasakawa Peace Foundation USA.