USJETAA Partners with the Sasakawa Peace Foundation USA (Sasakawa USA) to administer a Chapter Grant program for JET alumni chapters. Sasakawa USA provides the funding and support to the JETAA chapter in conjunction with USJETAA. USJETAA and Sasakawa USA mentor JET alumni associations and through the process of conceptualizing and executing their projects alongside them help chapters learn best practices for successful future programming. The program supports JETAA chapters so they can develop planning skills and the capacity to provide programming that furthers the U.S.-Japan relationship.

During the 2019-2020 grant year, USJETAA granted $14,929 in funding to three JETAA chapters for events in local communities. These projects have impacted over a hundred people and targeted the needs of the community, especially the JET alumni community.

Two of the programs focused on strengthening local U.S.-Japan ties and career development and one program focused on educating the public about Japanese culinary arts. JETAA Southeast – Alabama Sub-chapter  held an event supporting  local students by providing career guidance on opportunities to engage in U.S.-Japan relations. JETAADC celebrated JET alumni contributions, facilitated discussion on the post-JET pipeline and brought together local Japanese organizations to build relationships and foster future collaborations.  Lastly, NEJETAA combined the community, JET alumni, and Japanese culture with a program that included provoking discussions on the role of culinary arts in Japan and a screening of “Nourishing Japan,” a documentary about Japanese school lunch and food education.  All of these programs contributed to strengthening the U.S.-Japan relationship in their regions and laid the groundwork for future programs. Below are short summaries of the programs with links to the full event reports.

In September, the JETAASE Alabama  subchapter held its first event ever in Tuscaloosa, Alabama encouraging local university students to pursue careers in the U.S.-Japan relations field. Many of the 42 attendees were university students from six different universities across Alabama and Mississippi. This program gave the chapter an opportunity to reach students interested in Japan, but unaware of the opportunities available to them in the south. The event started with  a keynote address by Honorary Consul of Japan, Mark Jackson, highlighting recent U.S.-Japan contributions and initiatives in the state of Alabama. Opening remarks by Joy Champaloux (Wakayama, 2009-2012), Program Officer, SPFUSA; Raven Mckenzie (Hyogo, 2013-2015), Education Abroad Advisor, University of Alabama and co-leader of JETAASE Alabama; and Jolie Thevenot, Executive Director, Japan-America Society of Alabama (JASA) expanded on the  desire for their organization to engage with university students.

The first of two panels was on the topic of Americans working for Japanese companies in the U.S. featuring speaker, Mark Jackson alongside Charlene Butler, Associate Relations team with Honda Manufacturing of Alabama, and Trevin Dye (Tochigi, 1998-2001), Assistant Director at JETRO Atlanta who acted as both moderator and speaker.  The second panel focused on the topic of  Japanese study abroad opportunities, the JET Program, and skills for careers after JET. Raven McKenzie was joined by Mellissa Takeuchi (Hyogo, 2004-2009), Special Assistant at the Consulate General of Japan in Atlanta; and Valerie Stewart (Saga, 1999-2002), Treasurer of JETAASE and Vendor/Marketing coordinator at John Paul.  Jolie Thevenot moderated the discussion.

The program concluded with closing remarks from Ingrid Galinat (Toyama, 2000-2001) Assistant Director at The University of West Alabama and co-leader of JETAASE Alabama and a short demonstration on exchanging Japanese business cards by Yoko Minami, Japanese Outreach and Initiative coordinator at the University of West Alabama. Overall, the event was a great opportunity for students and JET alumni to network and for  JETAASE to create relationships with local Japanese businesses and organizations. Please check out the full report on this event. 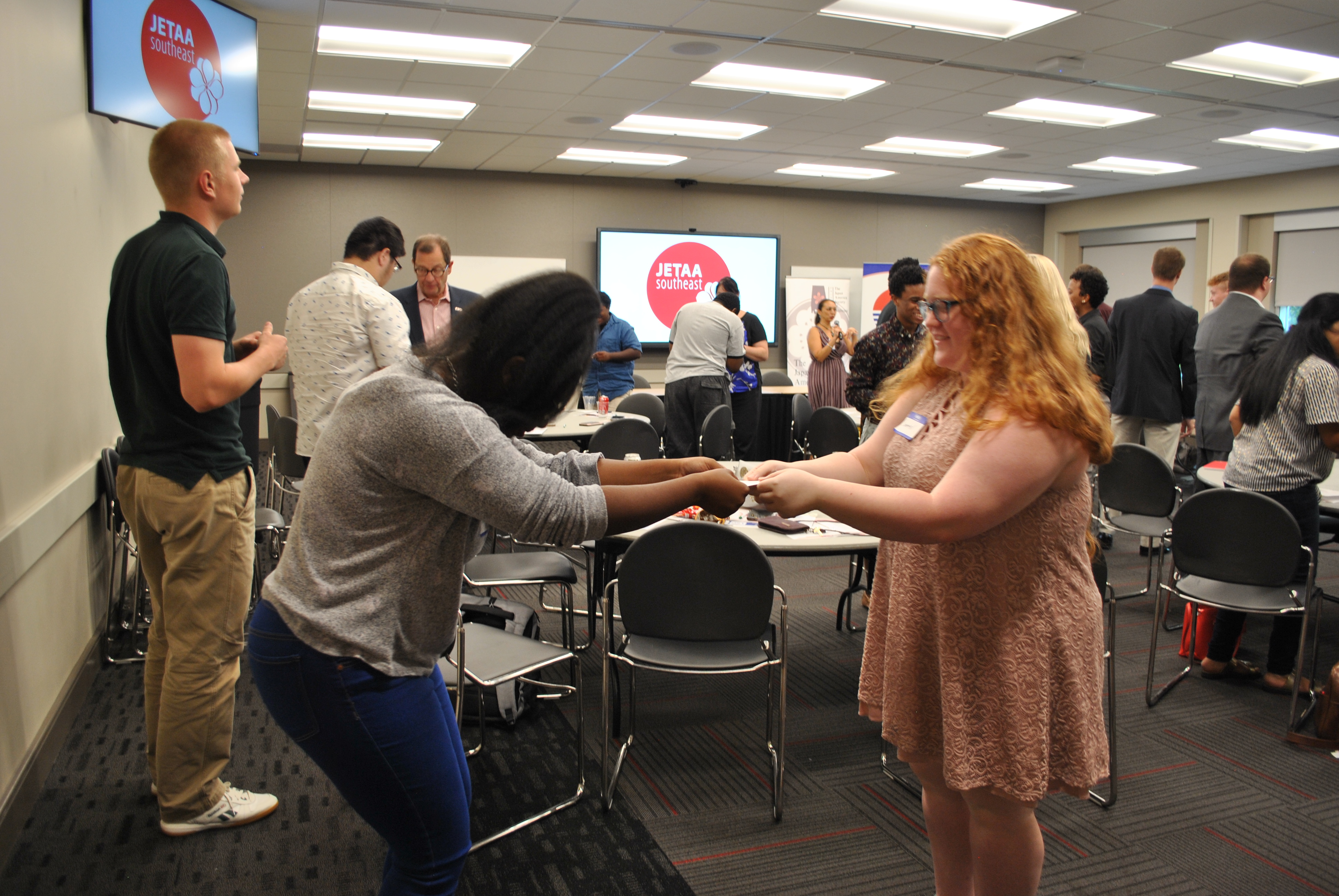 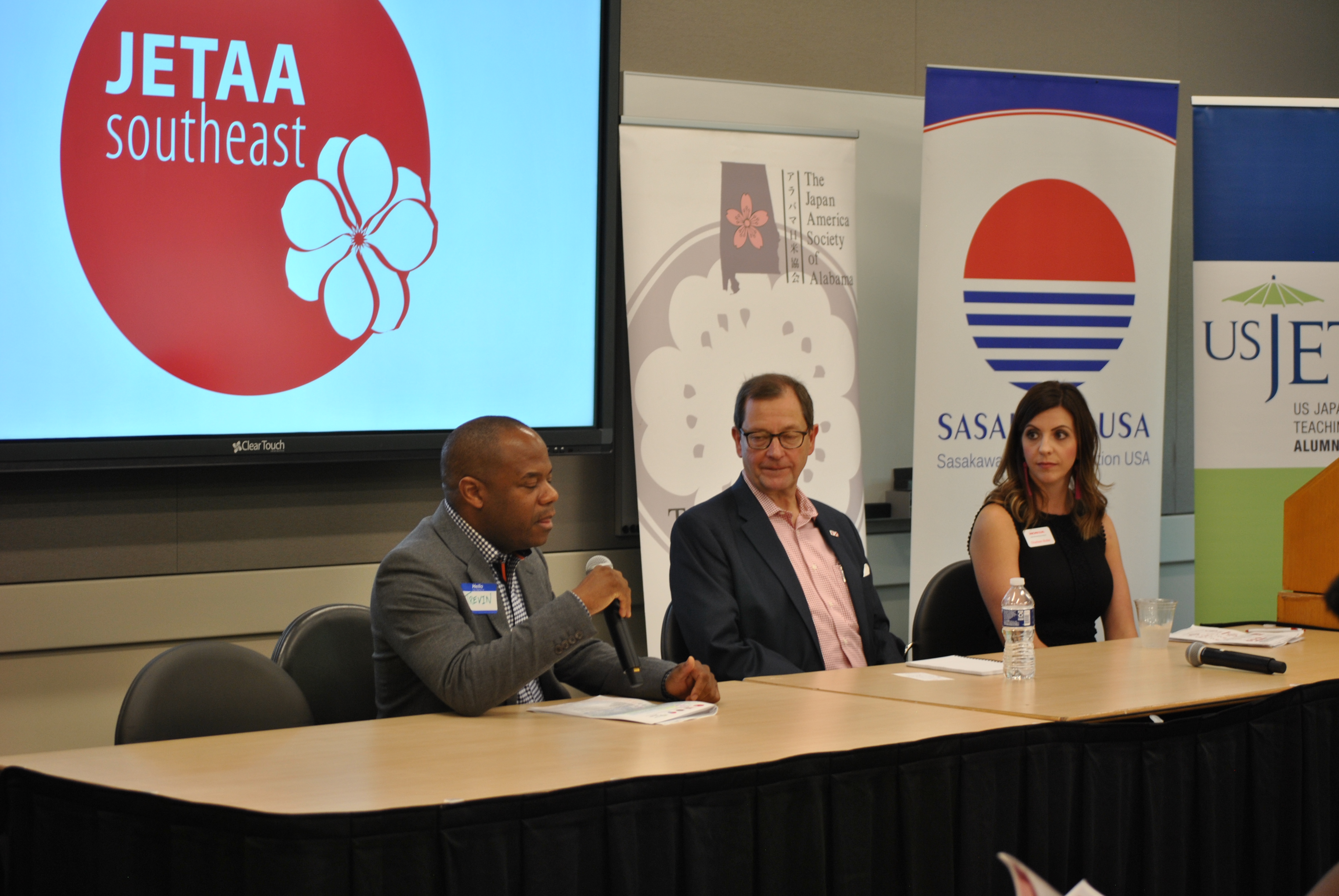 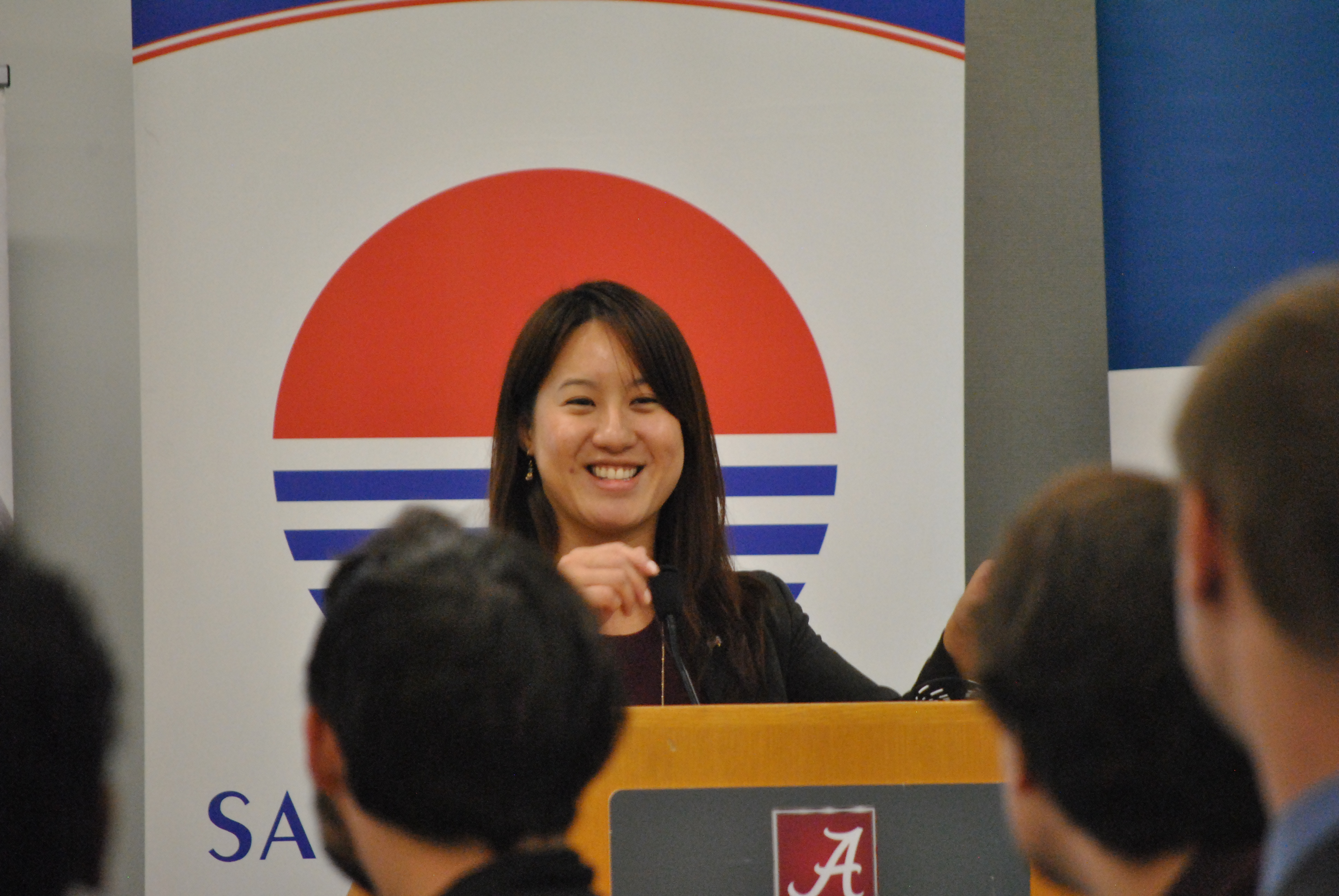 On November 7, 2019, JETAADC held their  30th anniversary event in Washington D.C. highlighting the role of  JET alumni in the U.S.-Japan relationship. The event celebrated the anniversary of the founding of JETAADC  by awarding the important contributions that  JET alumni have made through their jobs and volunteer activities. The event included JET alumni spanning the entire duration of the JET Program including the first cohort in 1987. The 42 attendees represented current and former JETAADC officers, the Japanese government, sponsor organizations, and the Japan America Society of Washington, DC.

The event opened with welcome remarks from James M. Lambert, Secretariat for Hemispheric Affairs at the Organization of the American States, and Cultural Vistas Board Member; Bahia Simons-Lane, executive director of USJETAA;  and Joy Champaloux, program officer of Sasakawa USA and former JETAADC president. The evening’s activities kicked off with an award ceremony featuring a keynote speech by JETAADC founding member, Paige Cottingham-Streater, Executive Director of the Japan-U.S. Friendship Commission, Executive Director of the U.S.-Japan Bridging Foundation, and Secretary General of CULCON. Paige shared that her vision for the future of the alumni association had held strong for the past 30 years and was awarded the inaugural Legacy Award for her leadership and significant contributions to JETAADC.  A discussion followed  on the continued growth of the chapter in strengthening a sense of identity as ambassadors for the U.S.-Japan relationships across  sectors.

After the opening discussion,   panel speakers shared how they have maintained the JET momentum and become strong U.S.-Japan leaders across different sectors.  Rachel Reed, president of JETAADC, served as a moderator for the evening. The panel featured Jordan Heiber, Deputy Representative at MUFG Bank; Kat Tarr, Coordinator for Japan and Korea, Office of Public Diplomacy, Bureau of East Asian and Pacific Affairs at the U.S. Department of State; and Jessica Kling, International Program Coordinator, School of International Service at American University. The  discussion focused on how the JET program has affected post-JET careers, how JET alumni can continue to support U.S.-Japan relations, and how JETAA chapters can help this process. This  conversation continued in small breakout sessions led by the panelists on the topic of the JET pipeline within t public diplomacy, the business/private sector, and in international education and non-profit work.The event helped to  grow and strengthen JETAADC to play a pivotal pivotal  role in the U.S.-Japan landscape in the region. Please check out the full report. 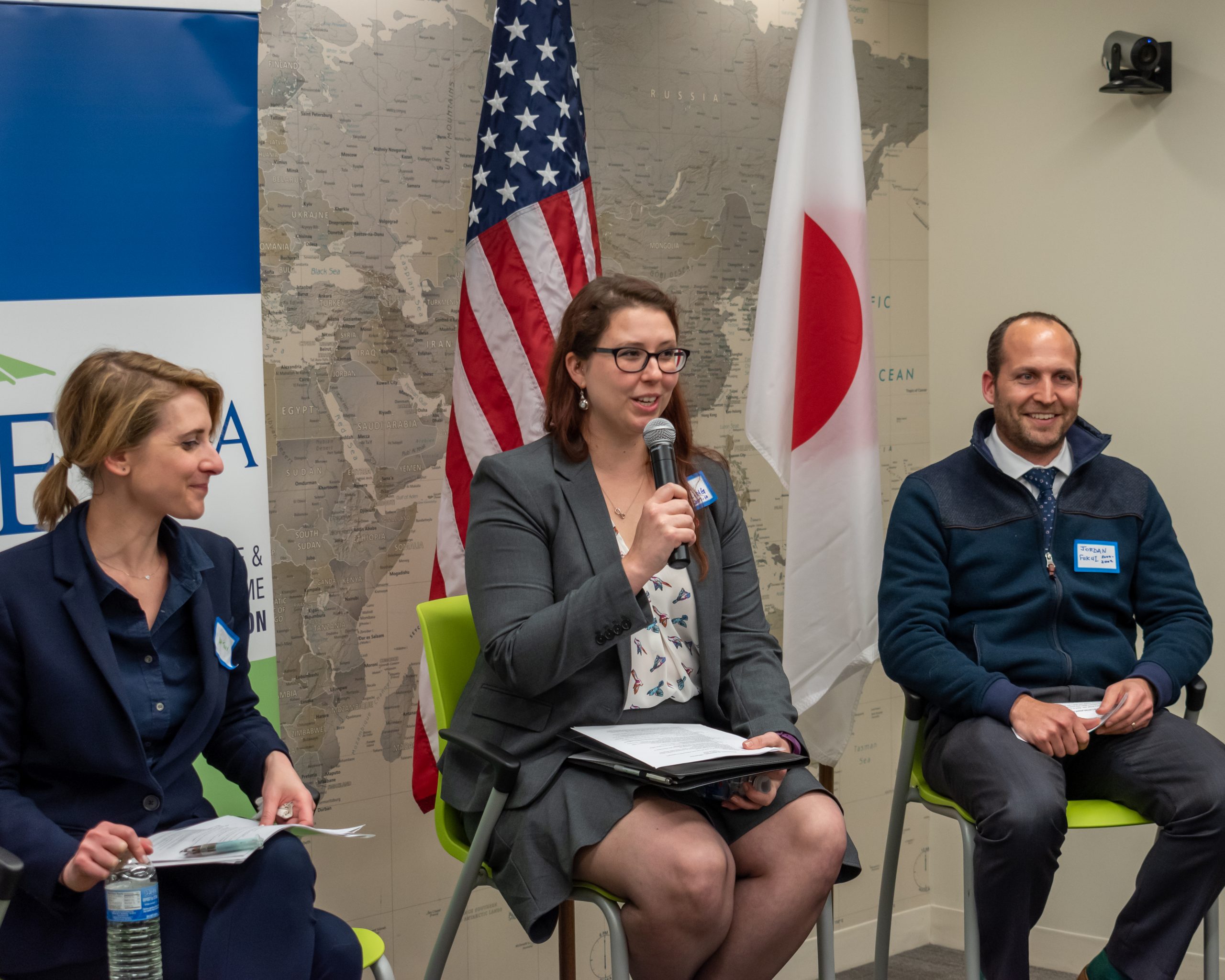 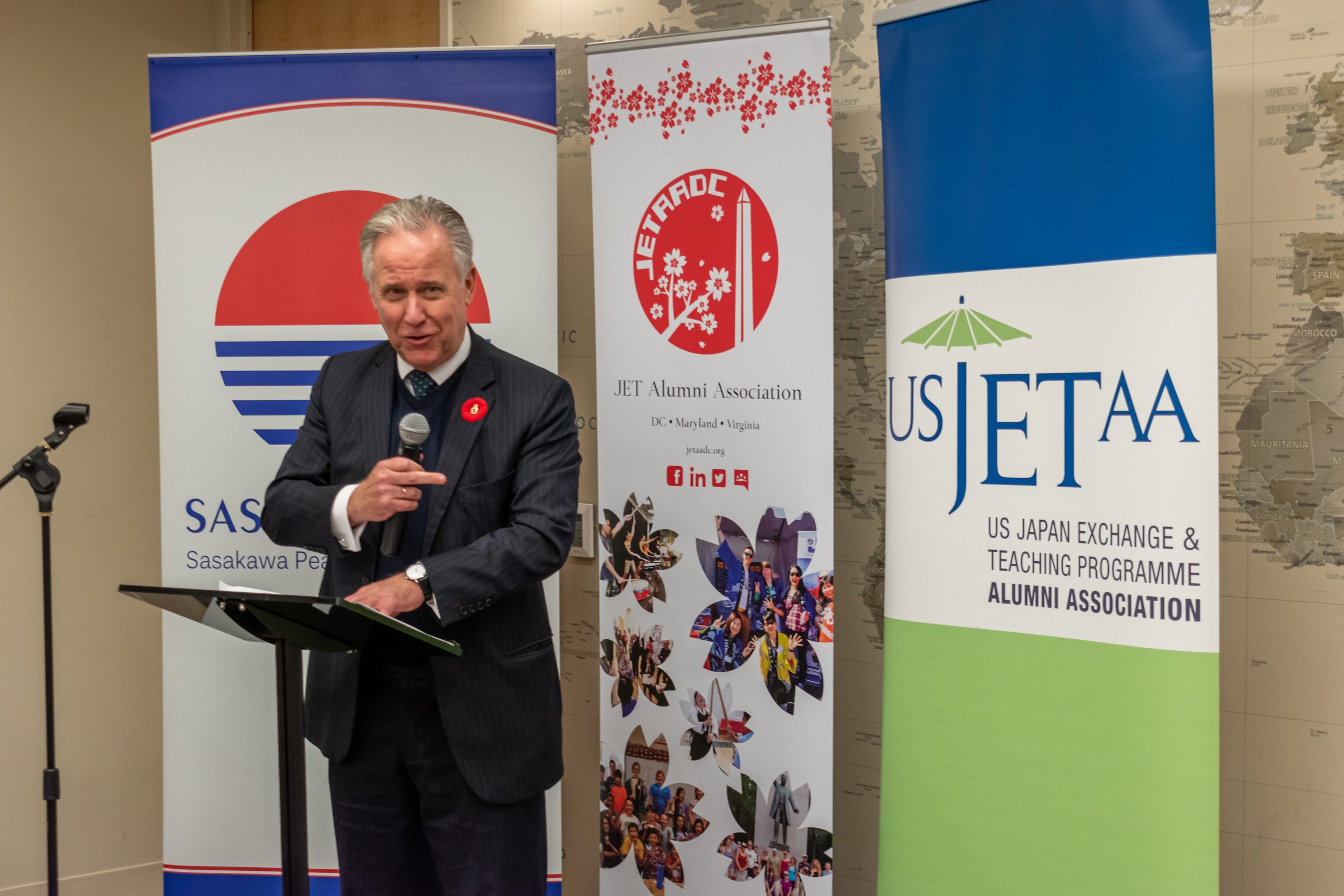 In February, the New England JETAA chapter partnered with the Japan Society of Boston (JSB) to co-host an educational event highlighting food as a universal language to build cultural understanding between the United States and Japan. This was  NEJETAA’s largest event ever with 68 registrants.  including JSB and NEJETAA members and their families. Many inactive NEJETAA members and JETs from the 80s and 90s  attended the event helping to re-establish NEJETAA’s  connection with the wider alumni network.

The first half of the event featured a lecture on Japanese cuisine and its historical and cultural significance to U.S. Japan relations, followed by an interactive workshop that taught attendees how to prepare and appreciate a healthy and traditional Japanese lunch bento. Both were conducted by Debra Samuals from Table For Two USA (TFT USA), a non-profit organization that conducts a K-12 school program, “Wa-Shokuiku: Learn. Cook. Eat Japanese!”. The Boston premiere of “Nourishing Japan”,  kicked off the second half of the event.  It is a documentary about kyushoku (Japanese school lunch) and shokuiku (food education in Japan). After the screening,  attendees had a Q&A session with the director, Alexis Sagliano Sanborn, a JET alumna.

This event was the second collaboration between NEJETAA and JSB, and the second time that NEJETAA has received this grant. Receiving this grant two years in a row has helped NEJETAA build momentum and create a stronger presence in the local community. The collaboration with the Japan Society Boston led to a stronger relationship between the two organizations NEJETAA and allowed them to develop a relationship with a potential future collaborator, the non-profit focused on Japanese food education and food security Table for Two. Please check out the full report here. 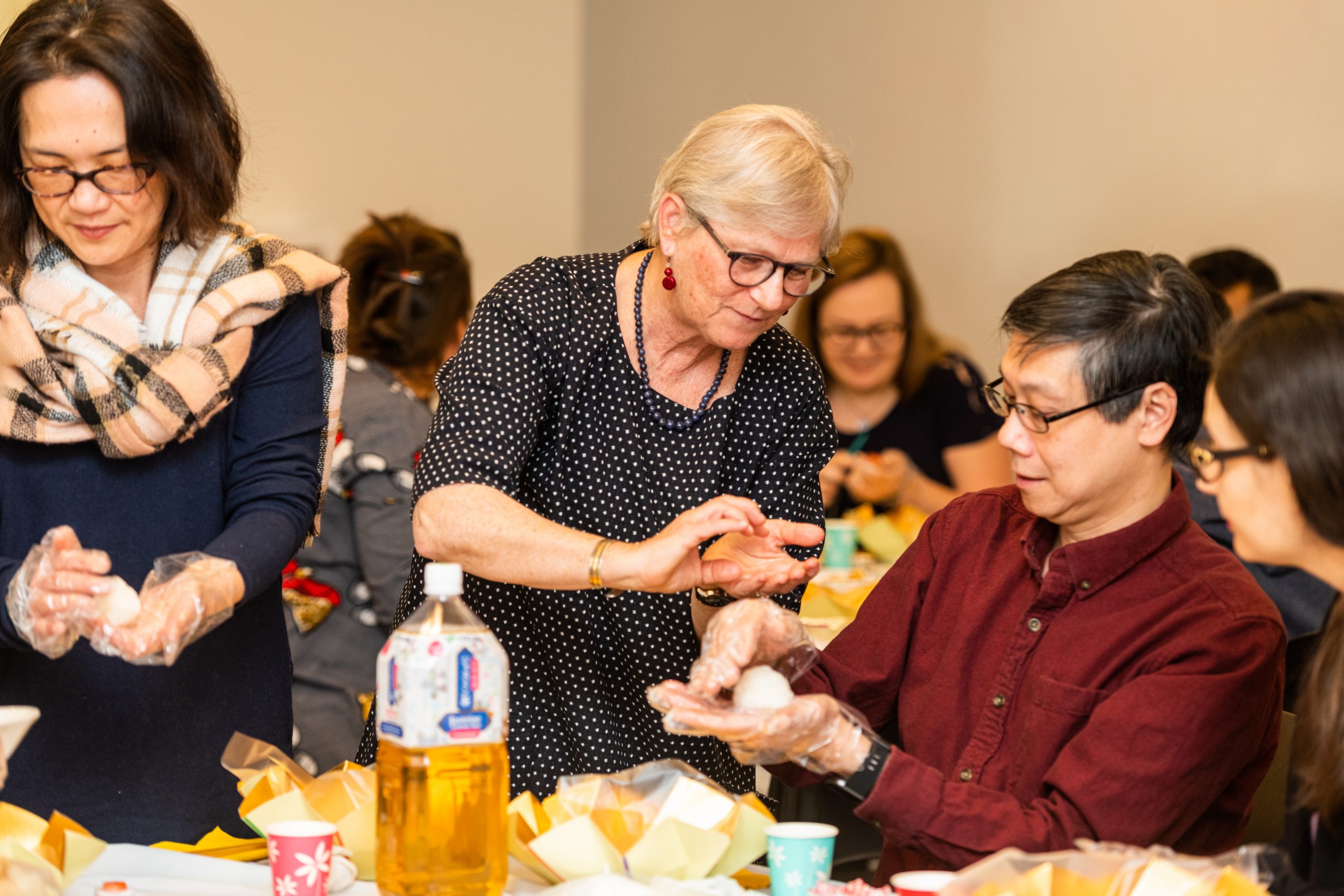 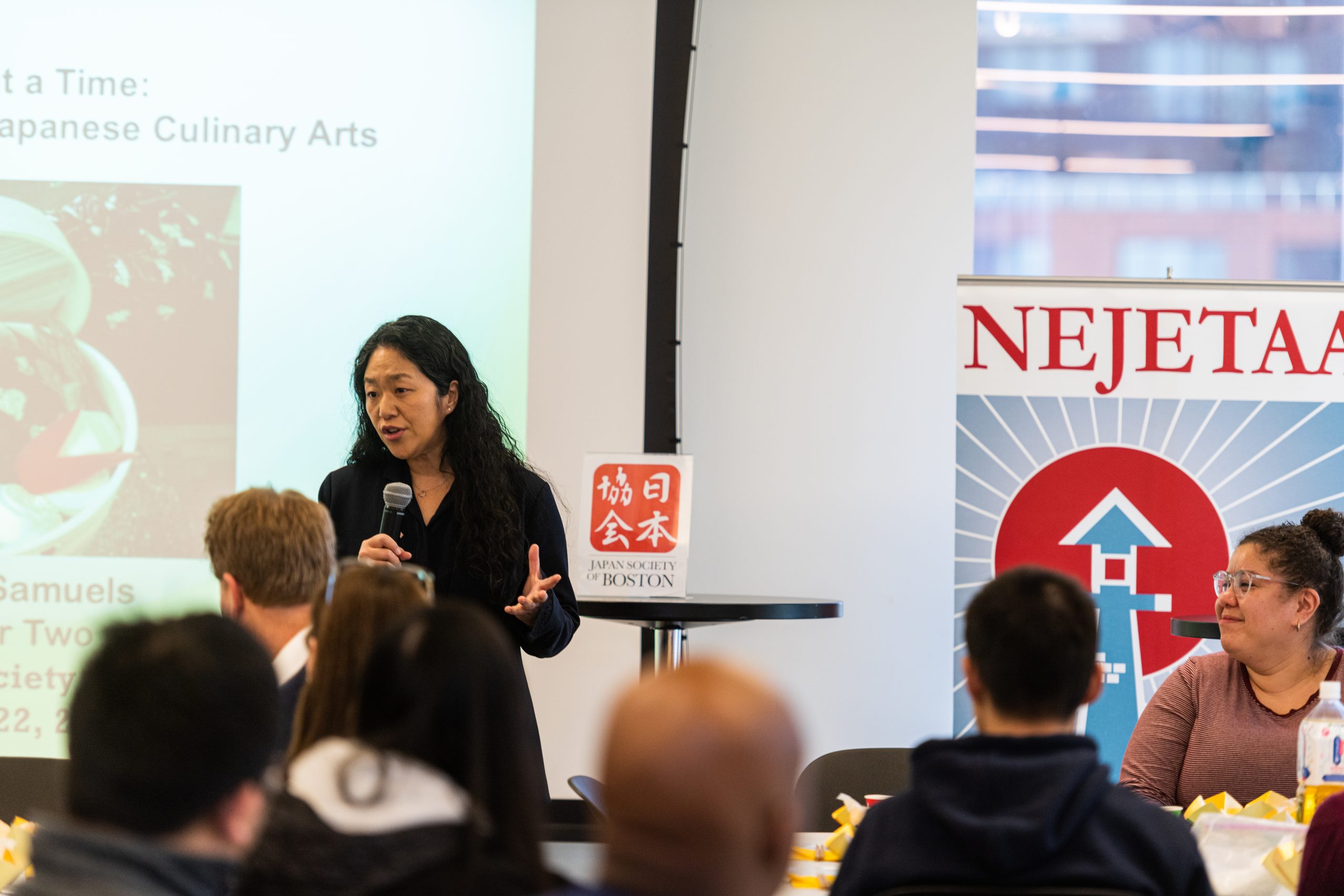 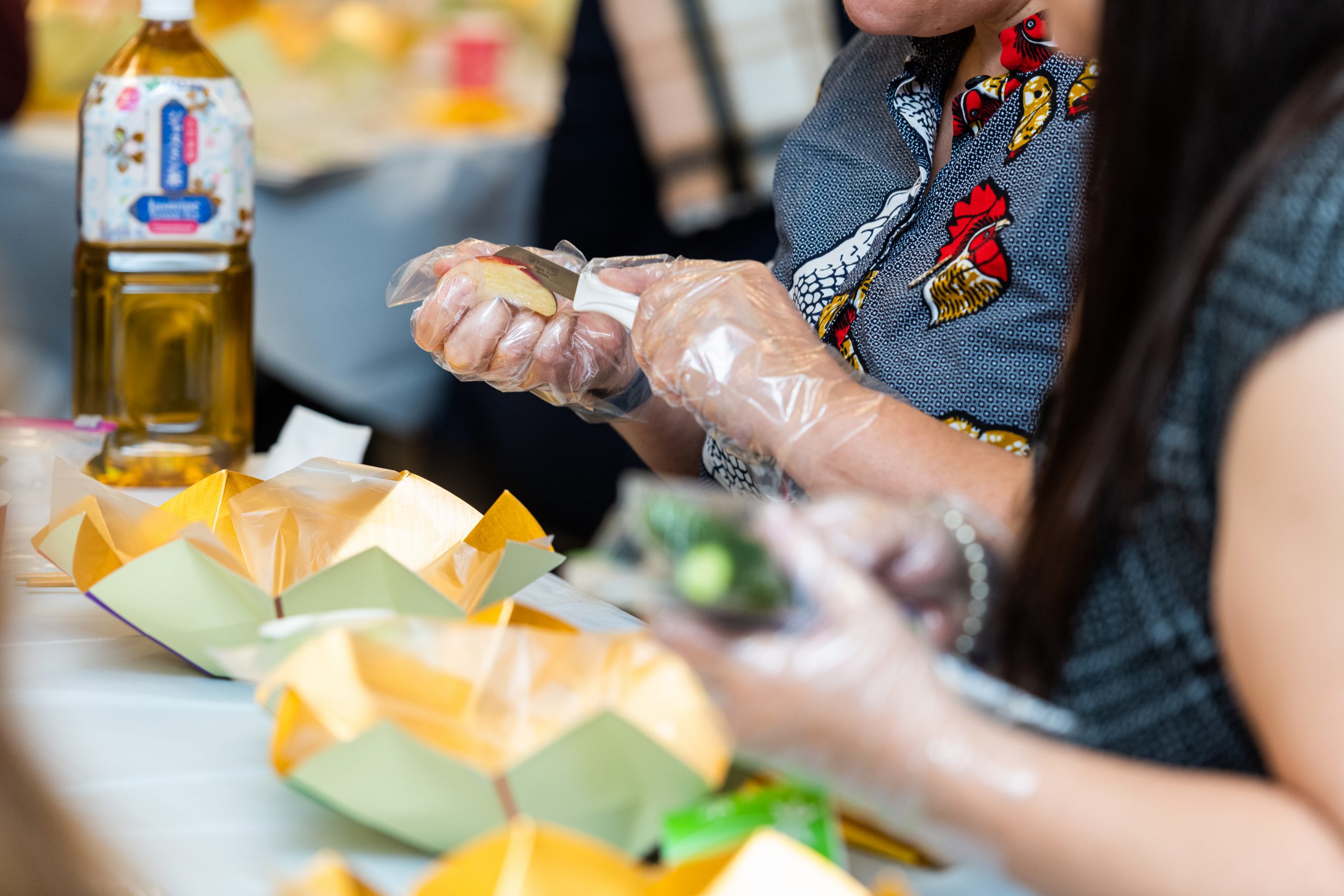 Keeping up with Past Grantees

Two of the grantees from the past planned to repeat the events they organized last year with support from this grant program. USJETAA and SPFUSA are very pleased to see that our goal of assisting chapters in organization future events is coming to fruition.

JETAA Florida held their 2019 Career Development Workshop on October 5, 2019. SPFUSA and USJETAA funded this workshop in its first year. This inaugural event allowed the Japanese Consulate in Miami to see the value of an event like this, and they fully supported it in 2019. For the benefit of JET Program alumni, the event focused on understanding the current job market with an emphasis on Florida trends and Japanese businesses, and included sessions on maximizing networking and marketable skills. This workshop was created with the professional needs of both returnee and veteran alumni in mind.  More details about this event are available here.

JETAA Minnesota planned to hold a repeat of their successful Japan-Minnesota Grassroots Forum from the previous year. For this event, JETAAMN and JASM planned to work closely together again to plan and execute the event. The forum in February 2019 brought together 28 representatives from 15 different organizations. The event was very well received with attendees looking forward to attending the next one.Unfortunately, due to the quick escalation of COVID-19 while they were in the planning stages of this event it has been postponed until further notice. However, they do plan to hold it again if possible.

Since we revised the purpose and scope of the grant partnership with Sasakawa USA, recent programs have  delved deeper into the U.S.-Japan relationship issues to go beyond the more superficial social and cultural events that JETAA chapters typically hold. The programs this year reached new audiences in new regions (such as Alabama) and filled holes in the U.S.-Japan related programming in areas that already hold U.S.-Japan events (as in Boston and Washington, DC). The longer-term impact of these programs has been continued collaboration between JETAA chapters and local organizations such as Japan America Societies to bring robust programming to the membership of both.

The chapters who have benefited from the grant have received training from USJETAA and SPFUSA that have allowed them to develop or reprise advanced programs on their own. New applicants to the program are thinking about projects earlier and  using opportunities for USJETAA and SPFUSA to provide feedback, which allows for stronger overall programming. Additionally, the partner programs have allowed SPFUSA to bring awareness of the broader context of current relations between the U.S. and Japan to all 19 JETAA chapters and to JET alumni across the United States and in Japan.