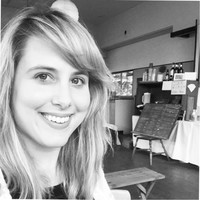 About the Author: Megan Magwood is a former intern at USJETAA, JUSFC, and CULCON and currently a graduate student at the University of North Carolina at Chapel Hill. She is enrolled in the Global Studies MA program and pursuing a certificate in Peace and Conflict Resolution. She is also a JET alumna who lived for two years in Tokushima prefecture in Naruto city, from 2013 to 2015. Her capstone research focuses on the exploration of newly created transnational space through traditional Ryukyuan dance performed by Okinawan immigrants.  Ms. Magwood holds a BA in International Studies and minor in Japanese from the University of North Carolina at Charlotte.

In the southwestern tip of Japan rests the fifth largest island in Japan, Okinawa prefecture. The prefecture is composed of 160 islands north of Taiwan with a populace of 1.4 million residents, with Naha as its capital city. Okinawa was once an independent kingdom maintaining a burgeoning trade with innumerable East and Southeast Asian countries. Such cultural exchange relations influenced by these countries render this prefecture’s history exceptionally diverse and different from other regions of Japan, having their distinct indigenous language and traditions. 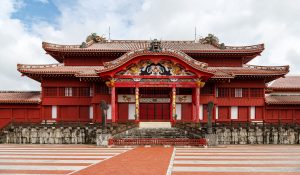 Not always having been a prefecture to mainland Japan, Okinawa has been subjected to the whims of imposed colonial order, which is a bone of contention in the local culture. These foreign forces include imperial Japan, U.S. military occupation, and the contemporary Japanese state. With a separate cultural heritage, many Okinawans struggled to become ‘Japanese’ by recognizing assimilation policies into the Japanese nation-state.

Okinawa tells a story about how remnants of scattered local identity are expressed throughout waves of different imperialistic forces. Okinawa is an archetype of the Pacific island experience: once a kingdom whose trade relations progressed throughout East and Southeast Asia, to experiencing subordination and colonial domination and eventual annexation of the kingdom to procure territory in relation to nation-building. With the presence of outside foreign forces, Okinawa has been depicted as a region that is “constructed and artificial in nature,” “fragmented,” and “asymmetrical.”[1]

Despite this fragmentation, Okinawa has managed to preserve a great deal of local island culture that comprises of traditional crafts, such as textiles, pottery, glassmaking, and performing arts. 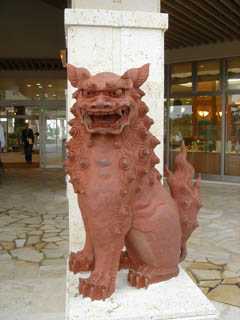 Variations of folk dance and the musical traditions of Okinawa have persevered through the ages and have become deeply rooted in the culture. The production of traditional songs has resilient local or hometown connections, or furusato (故郷), embedded in Okinawan culture to commemorate community and the homeland. Thus, Ryukyuan dance and song, both classical and folk, passed down since ages of the unified kingdom, have endured throughout the islands and hold social importance today. One of the more renowned and long-established performing arts, eisa, is a folk dance that originated from Okinawa.

Even textiles, lacquerware, pottery, and glassware often reflect the stunning vivid blues that are the Okinawan oceans. Tsuboya, the most celebrated pottery variety, remains at the epicenter of the Okinawan pottery industry. These Okinawan folk crafts are a cultural representation that have been passed down from generation to generation. Artist Jissei Omine has produced such vibrant work in the Japanese art scene. You can purchase his masterwork here at his gallery in the artist village of Yomitan, a pottery mecca.

Those interested in the thematic study of Okinawa can visit George Washington University’s collection, located on the 7th floor of Gelman Library at 2130 H Street, N.W. Washington, DC to explore the Okinawa Collection. A plethora of resources exist relevant to Okinawa and the history of the Ryukyu Kingdom. Outside visitors are welcome to access the Okinawa Collection as well as the Global Resources Center (GRC), however, if you are not affiliated with the institution, kindly call to schedule a visit in advance.