Japan’s agriculture industry faces challenges from a shrinking and aging farming population, an overwhelming presence of small-scale farms, and inefficient structural and political issues. Yet against this backdrop, an opportunity arises for Japan to preserve and support its agricultural communities by increasing the awareness of its traditional cuisine, sharing its philosophies around food and farming, and decreasing restrictive trade barriers with the U.S. 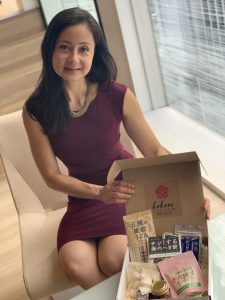 Lillian Hanako Rowlatt is a half-Japanese Canadian currently living in Los Angeles. She was an ALT on the JET Program in Kashiwazaki, Niigata from 2003 to 2005 and later went on to co-found Kokoro Care Packages as a way of connecting people to the traditions and culture of Japan through locally-made artisanal foods. Kokoro Care Packages promotes the philosophies surrounding Japanese food while supporting local farmers, producers, and their communities. Lillian has always believed in the power of food to nourish one’s body while connecting people to the land and people who created it. She holds a Bachelor’s degree in Mathematics from Queen’s University and spent almost a decade in finance before co-founding Kokoro Care Packages.