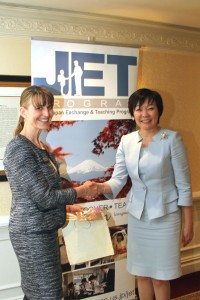 On April 29, 2015 a group of 20 JET alumni met with Mrs. Akie Abe at the Willard Hotel in Washington, DC to discuss the JET Programme. Arranged by the Embassy of Japan, the meeting offered JET alumni the opportunity to express their continued interest and support of the program, as well as share how JET impacted their professional careers. A number of participating JET alumni were on the program in the early years and have since followed careers building on that foundation, including careers in journalism, diplomacy and business. In addition, Mrs. Abe was quite interested in the experience of JETs who had lived in rural parts of Japan. As Japan’s countryside sees increased depopulation, the experiences JETs have in these rural communities are becoming more and more unique, even among the Japanese.

For JETAA, this recognition of the importance JET alumni play in furthering U.S.-Japan relations, is encouraging, especially as Tokyo looks to increase the number of active JET participants from 4,500 to 6,400 by 2020. For Tokyo, seeing that former JETs have propelled their experiences into influential careers in the U.S.-Japan relationship, is evidence of the value of JET even after participants have left the country.