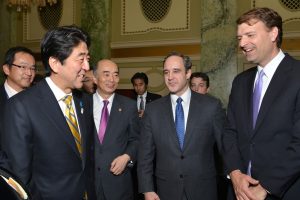 USJETAA and the whole community of JET Program alumni in the United States are shocked and saddened by the assassination of former Prime Minister Shinzo Abe today. Prime Minister Abe was a steadfast proponent of international exchange, stemming from his time studying abroad in California, and as prime minister he championed the JET Program and efforts to deepen US-Japan exchange at all levels. He became the most consequential leader in recent Japanese history and drew on people-to-people ties to advance Japan’s global leadership on an array of issues. He made his nation and our world a better place. On behalf of the nearly 40,000 American JET alumni, USJETAA extends our deepest sympathies to his wife Abe Akie, his entire family, and the Japanese people in this dark time.