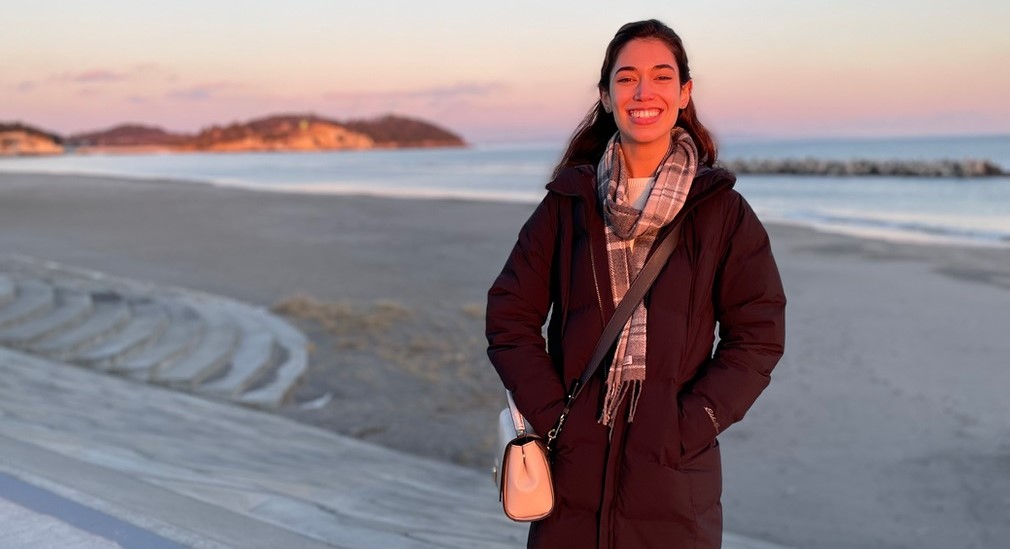 I was placed in Minamisanriku in Miyagi prefecture, from 2021 to 2022. It’s a small town on Japan’s northeastern coast, about half an hour south of Kesennuma and an hour and a half from Sendai, Miyagi’s largest city.

Mostly my time at JSB [Japan Society of Boston]! Being exposed to so many exciting cross-cultural programs, reading the stories of other former JETs, hearing the Japan journeys of our podcast interviewees – all of it inspired me to explore my own connection with Japan in a much bigger way. My interest in Japan began years ago when I read my first manga and expanded ever since, eventually leading me to study Japanese in college, and on to working at JSB and tutoring a Japanese family in English. As I learned more about JET, I knew I wanted this experience to be the next step in my journey.

Miyagi’s specialties include some unusual foods like gyutan (beef tongue) and shark fin, and like much of Japan, the prefecture is famous for its seafood. My town was especially proud of its Kira Kira Don (“Glitter Bowl”) which was an assortment of various raw seafood. My supervisor treated me to the Kira Kira Don on my second day there, but I never did try the gyutan or the shark fin. Sendai in particular is famous for zunda mochi (soybean mochi) and many other edamame sweets.

Besides great food, Miyagi is home to Matsushima Bay, a group of 260 islands considered one of Japan’s most scenic sites. I also had the pleasure of visiting Akiu Great Falls in Sendai, which was stunning even in the winter (although a bit slippery) and a nationally designated Place of Scenic Beauty.

While I struggled a lot more with the language than I thought I would, I do remember hearing some of the older locals using “nda,” meaning “yes” in Tohoku-ben. I also learned that “beko” means cow in the local dialect when I bought a “Maneki-beko” charm at a gift shop, a play on Maneki-neko (beckoning cat). I later learned about Akabeko, a legendary red cow from Aizu and the inspiration for the traditional bobblehead toy made in its image.

Do you have a specific memory or event that stands out from your time on JET? So many! One of my favorites was going to Kesennuma’s Slow Festa (the theme was “slow food and slow city”), where I got to eat some delicious food and saw actor Ken Watanabe perform in a band. I’ll also always remember when the junior high school I worked at had a Bahan (horse logging) demonstration. I had no idea what was going on, but I put on a hard hat and followed everyone outside and up a trail behind the school. After waiting in the woods while listening to a bunch of chainsaws, a horse came back down the trail dragging an enormous log behind it. I was wonderfully surprised and disoriented that day.

On a more somber note, I remember very clearly the 3.11 Commemoration held in Minamisanriku. I learned that every anniversary of March 11th, 2011, the day the great Tohoku earthquake and tsunami struck, school ends early for students and teachers to commemorate the day with loved ones. This year was the 11th anniversary, and after leaving school early I went to the 3.11 Memorial Park where hundreds of other locals were gathered and listened as they rang the siren that blared 11 years ago. While I cannot fathom the loss felt by those who experienced the disaster, it was a powerful reminder of what the area had gone through not so long ago and how much they had rebuilt in that time. I felt very proud to be a part of Minamisanriku in some small way. To name just a few more good memories, I really loved watching the student events like Undokai (Sports Day), Bunkasai (Culture Festival), and the graduation ceremony. I was not only amazed at how talented the students were, but the sense of community and team spirit in the school was incredibly inspiring and something I’ll never forget.

What are you doing now, and does it have any connection to Japan? How did your experience in Japan change your life?

At the moment I am still studying Japanese, and I am very excited to return to Japan next summer to study at a language school. While I’m still figuring out what direction to head in next, I hope to incorporate my language skills and experiences gained in Japan in whatever I do. My love of Japan has only intensified since, and I can’t wait to see where the journey takes me!

[December 2022] This interview is part of a partnership between the Japan Society Boston (JSB) and USJETAA in which JET alumni contribute short interviews about their experiences in Japan in each prefecture. Thank you JSB!