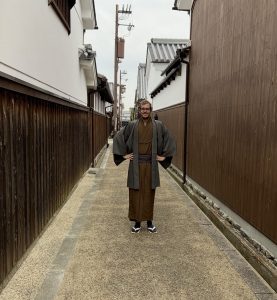 I was placed as an ALT in Shimokitayama Village, Nara Prefecture, from 2015 to 2017. Shimokita has a population of a little less than a thousand people, and is located in the far southeastern corner of the prefecture, right next to Kumano City in Mie. It’s far from everything and way up in the mountains, but such an amazingly beautiful place. I was originally waitlisted for JET, and I had a tense month of waiting before a position opened for me, and when it was Shimokita I was a little intimidated with how remote it was. After the time I spent there I wouldn’t have traded it for anything. It was a wonderful two years and Shimokita is full of warm, wonderful people that really made me feel welcome and appreciated.

What sparked your interest in applying for the JET Program?

I studied abroad at Sophia University in Tokyo in the spring of 2013. It was only a four month program but I loved every minute of it, and as soon as I boarded the plane to go home, I knew I had to go back. My Japanese politics professor at my undergraduate school mentioned that the JET Program was a great opportunity to go and live and work in Japan – so it was thanks to him for inspiring me!

Nara has a ton of specialty goods and famous locations. You can’t shake a stick without hitting anything deer-themed, and Mt. Yoshino is one of the best sakura spots in the world. But even the little things, like persimmons everywhere in fall, or finding a kofun in the middle of town, are what I found special about Nara. Living in such an understated ancient place was just so cool.

Did you pick up any of the regional dialects?

I certainly did! I’ll fully admit I wasn’t great at Japanese when I arrived in Nara. The first thing my supervisor said when we met was “My name is Otani, I don’t speak English,” I’ll never forget it! Since Shimokita had very few English speakers, I had to learn by picking up from my surroundings, so I ended up speaking with a very local accent. Many things are influenced by Kansai-ben, so I would always say “wakarahen” instead of “wakaranai” and “sundehatta” instead of “sundeita.” These little differences would stick out when I traveled, especially in Tokyo people would be very surprised to hear an American speaking Kansai-ben! When I started saying “wakarahen” around the office when my coworkers asked if I understood things, they would say “Oh Jayson, you really are Kansai-jin now!” My favorite word though is “ookinno,” a Shimokita version of the Kansai-ben “ookini.” The teachers put it on the shirt they designed for the sports festival in my second year and I still wear it with local Shimokita pride.

100% yes. Nara became a second home for me while I was in Japan and I couldn’t see myself living anywhere else. I still have lots of friends there, former JETs and my old co-workers too. I was lucky to take a vacation to Japan in November 2019, and I spent half the trip wandering around Nara checking up on my favorite second hand shops and wandering the roads I used to drive my little Suzuki Alto around when I was an ALT. Nara just has such a comfortable, familiar feeling that living anywhere else just wouldn’t feel right.

Of course I was acquainted with Japanese pop culture growing up in the Pokemon era. But thinking of Japan as a tech heavy cyber land that produced all the video games I loved as a kid was really a misguided image. Living there long term showed me that Japan’s real charm lies in how even the mundane things of life are beautiful. A two-meter tall bonsai tree that’s been raised for over a hundred years. Sitting in a temple garden and watching a koi fish lazily float around the pond. Buying special versions of your favorite snacks every season at the konbini. The daily rhythms in Japan just have a different feeling that life in other places can’t replicate. Now when I think of Japan, it’s a wistful place full of nostalgia and memory. There’s just nowhere else quite like it.