As part of our partnership with the Japan Society Boston, we are sharing excerpts of interviews with JET alumni on our social media and blog. We will work our way down Japan and share interviews with participants from all 47 prefectures! 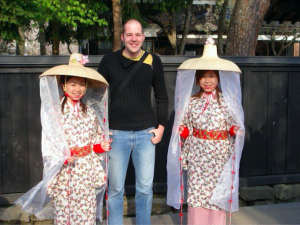 I was going to University to be a teacher and unsure about wanting to teach in the U.S. I had some friends who were already in the program. Their stories and my own desire to do something new inspired me to apply.

Culturally, it might be best known for a number of winter festivals and traditions including the Kamakura Matsuri in Yokote and the Namahage from Oga.

Also, Akita Inu are probably a quick association many people have with the prefecture. The famous Akita-inu, Hachiko, is actually from Odate where a similar statue to the one in Shibuya also stands.

Did you pick up any of the regional dialects? What are some of your favorite words or phrase?

I picked up a few, but because I started JET not knowing any Japanese, I didn’t really know I was picking up any region-specific phrases. One of my favorites is still “nda” which is just another way to say “soudesu”.  It felt good to understand what someone was saying and be able to reply “nda, nda, nda”

I also like the Akitaben for “tabete,” or eat, which was just Ke.

Lots of Akitaben and the general Akita accent was clipped and shortened. People said it was so that people wouldn’t lose too much hot air speaking in the winter.

Absolutely. Akita is incredibly endearing and I think there’s something there for everyone. While a lot of the prefecture is rural and remote, I think many of the people I met were proud of what the prefecture has to offer and eager to show you why it’s a great place to be. I think about it almost every day 10 years after I left.

I still feel very connected to Japan and the friends and memories I built there. While I do not work in a field directly connected to Japan, I have found ways to find connection. Currently, I’m on the board of the New England JET Alumni Association, and I’ve had a few occasions at my current organization in Boston to support the Fish Family Foundation’s Japanese Women’s Business Initiative.